The focus of the program this past year has continued to be on integrating all legacy bodies into the CPABC Practice Review Program. In particular, the program has been focused on ensuring that firms who perform audit and review engagements are executing procedures that are responsive to the entity’s risks and appropriately documenting those procedures. Another area of focus is the risk-assessment procedures in audit engagements, particularly in obtaining an understanding of controls and their effectiveness when a substantive approach is used.

For the 2016-2017 inspection year, 830 offices were inspected. The overall pass rate was 89% (as compared to 91% in the prior year), with 11% of the offices being assessed by the Public Practice Committee (the Committee) as not meeting the requirements of the Practice Review Program. Of the total 830 inspections completed, 373 of the offices performed assurance work and the remaining 457 offices did not perform any assurance engagements. 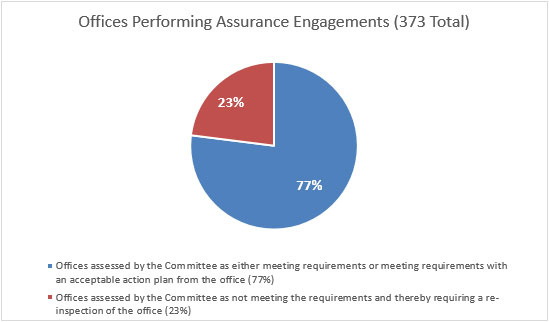 For the firms that performed assurance work and were assessed as not meeting the standards of the Practice Review Program, there were some notable findings:

Areas of Focus for Practitioners

One of the underlying causes behind the significant deficiencies identified in review engagements is insufficient documentation. Many firm responses indicate that matters were discussed with the client, but had not been documented, which is not sufficient to meet the documentation standards.

Another key issue was that, when analytical procedures were performed, they were often done at a superficial level, which resulted in insufficient enquiries of management. When enquiries are made, sufficient professional skepticism needs to be given to replies from management when these replies are inconsistent with other information in the file.

The primary areas where documentation and/or performance of the inquiry, analytical procedures, and discussion in files inspected needs to be improved are as follows:

Once the new CSRE 2400, Engagements to Review Historical Financial Statements, comes into effect on December 14, 2017, documentation will become even more critical. The new standard places greater emphasis on the practitioner’s professional judgement in recognizing circumstances that may cause the financial statements to be materially misstated. Greater documentation will be required around the practitioner’s understanding of the entity, specifically with respect to accounting systems and the identification of areas in the financial statements where material misstatements are likely to arise. Furthermore, a calculation of materiality will now be required.

A common theme behind many of the audit deficiencies raised by practice review is that the documentation of work performed was inadequate or not evident in the file. In many instances, documentation was not sufficient to enable an experienced auditor, having no previous connection with the audit, to understand the nature, timing, and extent of procedures performed; the results of those procedures and audit evidence obtained; and any significant matters that arose during the audit. In addition, when there were significant professional judgements made, the audit work performed and the basis of support for conclusions reached was not always documented.

Another area where many firms encountered deficiencies related to performing insufficient planning procedures, particularly around assessing risk by understanding an entity’s controls and assessing the effectiveness of these controls. Even if the audit approach does not rely on controls, understanding processes where controls may be insufficient or not working as described is still crucial to designing effective substantive procedures. Frequently, when deficiencies were identified with regards to poor design and execution of substantive procedures, the underlying cause of the poor design was due to the entity’s risks not being identified and assessed due to a lack of understanding of the client and its operations.

Additional areas where audit deficiencies were identified were as follows:

When insufficient work is performed in audit or review engagements, there can also be issues in the related financial statement disclosures. As an example, one of the most common financial statement deficiencies is when an entity’s significant accounting policy includes a template revenue recognition note. The note is frequently not customized to the entity’s actual operations due to the practitioner not having gained sufficient knowledge of the entity’s operations during the planning stage of its engagement.

Many firms that perform assurance engagements utilize one of the standardized Quality Assurance Manual (QAM) templates as the basis for documenting their quality control policies and procedures. While such templates are a useful starting point for the documentation of a firm’s policies, they should be tailored to meet the firm’s requirements and actual practices, while still remaining compliant with the requirements of CSQC 1, Quality Control for Firms that Perform Audits and Reviews of Financial Statements, and Other Assurance Engagements.

An important area that is frequently not tailored is the firm’s criteria for when an EQCR should be used for engagements. A firm should always ensure that it understands its areas of experience and the risk of its engagements in order to appropriately manage that risk.

Many firms are still not performing cyclical monitoring as required. Cyclical monitoring involves having an individual with appropriate expertise, who was not part of the engagement team, inspect at least one assurance file for each engagement partner. This is a way to get a fresh set of eyes on a file to identify any potential issues, and it is strongly advised to have this cyclical monitoring performed at least one year before a firm’s practice review so that identified issues can be remedied and files selected for practice review will reflect the improvements identified during the monitoring.

Tax engagements encountered issues due to a lack of knowledge of compliance procedures, such as adherence to client’s filing deadlines, lack of retention of key documents, and not obtaining signed T183s from a client when the returns were e-filed.

Additional common deficiencies are as follows:

Firms may be required to submit an Action Plan to CPABC in response to the reportable deficiencies raised during the inspection. CPABC provides an action plan template which can be found in the Practice Review section of the CPABC website. The template covers how the firm plans to address each deficiency, identification of root causes, and actions the firm will take to address the more systemic issues identified. Some actions which may be taken include professional development courses by partners and staff, updating checklists used within the firm, and increasing supervision of teams performing assurance work. When drafting an action plan, the firm is strongly advised to review the CPA Canada Handbook sections referred to in each deficiency to ensure that their response is appropriate.

Staff will evaluate the action plan to determine whether it is satisfactory and adequately addresses the deficiencies raised in the practice review. If it is unsatisfactory, the Committee may recommend that a firm have a re-inspection at a cost to the firm when one was not initially required. If a firm was already required to have a re-inspection, the Committee may recommend additional consequences, such as requiring a supervised practice or restricting the firm from accepting new engagements.

When a Practice Review Officer has identified a potential material error, the firm is required to perform an analysis to determine if there is a need to retract and reissue the financial statements.  This analysis must be prepared in accordance with the relevant section(s) of the CPA Canada Handbook, with reference to appropriate supporting documents. A firm is responsible for ensuring that it consults or engages external specialists, if necessary, if it does not believe it is able to prepare an appropriate analysis on its own.

Practitioners are strongly encouraged to practice in only those areas for which they have knowledge of the industry and sufficient experience with the standards. For those areas where they may lack expertise and knowledge, they are encouraged to consult a professional colleague to ensure that risks are being appropriately addressed or they may consider referring the engagement to a more experienced practitioner. In cases where firms were not meeting the professional standards, the practitioner was often considered to be “dabbling”.  Practitioners often have the best intentions when accepting a one-off engagement (e.g., a special request by a long-term client) but find themselves not meeting professional standards and therefore subject to a re-inspection. It is important to practice only in those areas for which a practitioner is willing to invest the time and cost to stay current with the standards.

Share this story
News & Views Knowledge Base
Have a question?