How will the agriculture industry feed the hunger of a swelling global population as pressures mount from climate change, invasive pests, declining arable land, and limited water? To sustainably and effectively feed everyone, the United Nations estimates agricultural output must increase by 40% by 2050.

Part of the solution lies in radically rethinking conventional large-scale farming practices that rely on mass applications of chemical inputs and intensive water consumption. And as with most advances these days, data will play a key role.

“Everybody knows that big data will be a critical tool in helping solve the challenges facing the agriculture industry,” says Ron Hastings, director of finance at Semios, a precision agriculture technology company at the forefront of doing just that. Ron, a Chartered Professional Accountant, manages Semios’ investor relations, secures funding, and helps lead the company’s business strategy.

How Semios is disrupting the agriculture industry

Essentially, the company provides an intelligent mesh that blankets, monitors, and responds to environmental conditions affecting the crop. Farmers can leverage this information to make decisions in real time, via the Semios mobile app.

A farmer uses the Semios app to monitor growing conditions in an apple orchard in Washington State. Photo: Semios

The result for Semios’ clients is a vastly improved data-driven ability to evaluate and respond to growing conditions that makes their business more sustainable. And the result for the agricultural industry? Disruption.

To date, Semios works primarily with large-scale fruit and nut orchards, including the almond industry which has an annual economic value of approximately $21.5 billion in the state of California alone. 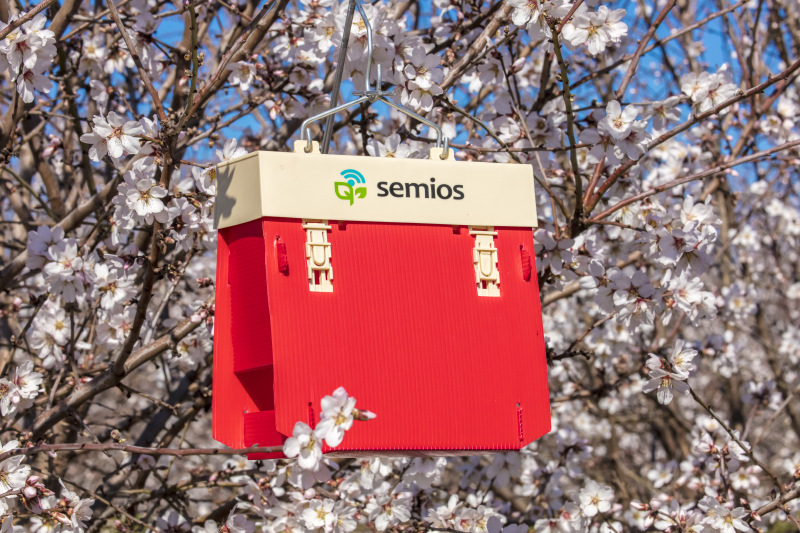 Semios was one of the first companies to design a smart network that would function effectively in orchards. “It was a big challenge to build a wireless network in a biomass environment like an orchard,” says Ron, “because the water in the leaves disrupts the signals used to transmit data.”

But Semios succeeded and now helps its clients make smarter, data-based decisions. “Farmers have logistic decisions they have to make as they go through their season and their questions are, ‘How can I optimize spray, apply pheromones, water, and fertilizer to maximize my crop quality and yield?’ Using big data, we have that ability to be able to help them with every one of those decisions,” says Ron.

A Semios pheromone dispenser in a citrus orchard. Pheromones are used to interrupt the mating process of specific insect pests, leading to lower populations and, in many cases, a reduction in the application of pesticides. Photo: Semios

Another way Semios is disrupting agriculture is through its approach to pest control. Networked camera traps collect photos of pests and send this information to farmers daily. If a pest is deemed a threat, growers apply a pheromone formulation to a targeted area using a remote-controlled dispenser installed in the orchard.

The naturally occurring and

organic products, developed by Semios, disrupt a specific pest’s mating patterns, preventing it, and only it, from reproducing and thus reducing its ability to damage crops. “We are definitely disrupting traditional agricultural chemical companies like pesticide producers,” says Ron.”

The company is also changing how the agriculture industry consumes water. Its platform includes sensors that monitor moisture and soil conditions and let farmers know every ten minutes if soil and leaves are too dry or too wet. Sensors also identify areas saturated with moisture, which could lead to disease risk or produce lower-value crops. This smarter way of watering greatly reduces water consumption. “Our technology allows farmers to water just what they need to, when they need it,” says Ron.

Monitoring and responding to environmental conditions in real-time

Semios’ sensors also monitor for other environmental conditions such as temperature. “Our platform captures so much environmental data on an acre-by-acre level – granular data on heat, temperature, and water – all of the factors that have the potential to generate insects and disease. These data can be used to solve most agricultural problems,” says Ron. Some growers using Semios’ platform report seeing damage to their crops decline by up to 50%, resulting in a direct increase in profit to the grower.”

Semios’ technology is also disruptive because it is predictive. It uses data models to forecast pest and disease activity, and weather events that could harm crops, then alerts farmers to these conditions. This allows farmers to take proactive measures to prevent damage before it occurs.

A Semios team meeting at one of its distribution warehouses in California. Photo: Semios

Scaling up by demonstrating success to new investors

Ron’s financial expertise has helped Semios grow from a start-up to a high-growth company that recently tripled its office size. “Initially, our financial support came from private investors who believed in the company’s product,” says Ron. To move the company forward, his ability to gain the confidence and support of major new investors, including government granting agencies and commercial banks, was key.

Communication and relationship building were at the core of his efforts, as was his ability to demonstrate the commercial success of Semios’ product, its increasing customer traction, and successful revenue model. “My job is about the numbers, but in the end it is about strategy and trust and being able to communicate that in a way that will convince someone to support you because they believe strongly that your product is going to do well,” says Ron.

“When I came onboard in 2017, we were at that tipping point where I said to our CEO that we could now double our revenue growth without the use of new equity funding but simply by using customer money and commercial debt financing. However, we also want to invest in new research at the same time as we scale our core business. So we need to raise money beyond our revenue growth,” he notes.

“In an effort to do that, I contacted the gamut of government granting agencies like Sustainable Development Technology Canada (SDTC) and the Industrial Research Assistance Program (IRAP). By demonstrating the commercial strength of our product and the science behind it, we were able to bring many of these agencies to the table at once through the federal government’s Accelerated Growth Services (AGS).”

“As a result of our conversation through AGS, Western Economic Diversification Canada provided Semios with scaling-up money; we’ve been accepted for a $2.5 million IRAP project, we received a $9.9 million SDTC partnership to fund our new research, and were just awarded a $5 million interest free loan from Western Economic Diversification Canada for the purpose of scaling up our operations.

Semios’ success now positions it to work with new crops, in different parts of the globe. “With our technology, we could go anywhere in the world,” says Ron. "We’ve identified Italy, Spain, Turkey, Brazil and Mexico as possible next targets. And olives and grapes are two of the crops we would like to work with.”

In closing, Ron reflects, “I can’t tell you how exciting this is, both from a business perspective and from a sustainability point of view.”

Read more profiles on CPAs who are leading innovative BC-based companies who are disrupting the traditional business landscape.

Leah Giesbrecht is a communications specialist with the Chartered Professional Accountants of British Columbia.

CPA Profession
"It just clicked" - Why Rhian Quarry made the switch from science to the CPA
It was while working reception at Madison Pacific Properties Inc., a real estate management and development company in Vancouver, that Rhian Quarry realized she wanted to become a CPA. She had just completed her bachelor’s degree in health sciences and was looking for a new direction when inspiration struck.
By Megan Hooge

CPA Profession
Jody Kidd helps lead Copperleaf with her spirit for innovation and progress
Jody Kidd has never been one to be held down by limitations. As a young adult, she knew she wanted a career that would not restrict her to any one particular industry.
By Vince Kanasoot

CPA Profession
Maintaining resilience in tough economic times is vital
If there is one central theme that could be highlighted for the year of 2020, it would undoubtedly be the fragility of health, and the need to preserve it at all costs.
By Business in Vancouver